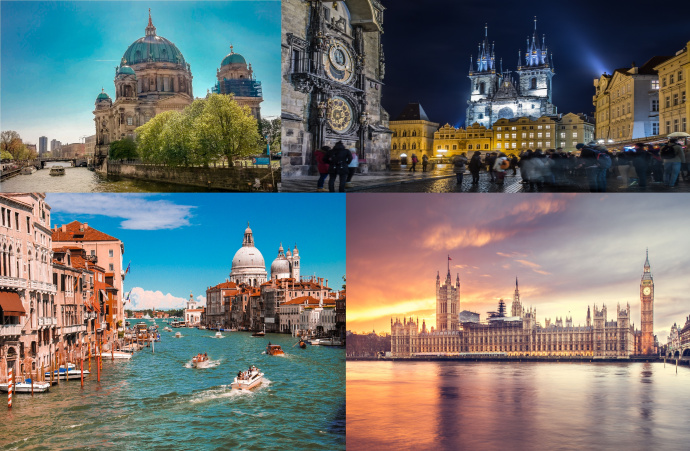 You’ve probably heard of him. Likes to talk. Teenage boy. Likes to dress up as a spider. Swings around New York.

Returning from space, our friendly neighborhood Spiderman goes on a school trip around Europe this summer! We’ve listed for you all the filming locations in the movie so you can visit them yourself! Best part is, they’re not very hard to find.

These are spots where he was seen swinging around (SPOILER-FREE).


Widely known for gondolas, canals and The Carnival in February. Walking around on the islands, you’ll see tons of stores selling carnival masks even during the Summer. This makes it easy for Spidey to hide his identity. You can visit the famous Grand Canal through the white Rialto Bridge or by gondola.

Unless you’re on the seafront, walking around the island will be a challenge for the first time. The streets are widely dubbed as the “Venetian maze” which is fitting. You’ll be walking in alley ways and tight spaces, some can barely fit 2 people side to side. In some you’d have to duck, not to mention, dead ends. Lots and lots of dead ends. But don’t worry, getting lost in the city will be part of the experience. You will explore tons of stores, galleries and 15th century squares.

Click here for Historic Hotels to stay in Venice


The City of a Hundred Spires, a perfect place to swing around. If New York is glossy and urban, Prague is bricked and ancient. Just like Venice, Prague is a beautiful city with a distinct charm. Couples, families and solo travellers alike will have a ton of things to do in the day or at night.

Charles Bridge is a perfect place for a romantic walk. The 10th-century Old Town Square is brimming with culture and people. The Prague Astronomical Clock is a timeless monolith about well… time.

Click here for Boutique Hotels to stay in Prague


Yes, another city in Czech Republic. The Liberec Town Hall is a great destination. This Neo-Renaissance architecture is surrounded by equally impressive statues and surrounding buildings. But as you look closely at the city’s skyline, you’ll notice something. At the highest peak of the mountain, a space-like tower stands. No it’s not aliens. It’s the Ještěd Tower. From the base, it’s as tall as the Statue of Liberty. Perfect for watching the city below.

Click here for Romantic Hotels to stay in Liberec


Arguably one of the most historically rich cities today. This one is filled with a bohemian type of lifestyle. Shining on its own with art, nightlife and music.

Aside from the usual tourist spots, the Brandenburg Gate, Berlin Wall’s street art and the Reichstag Building, try out the view on top of the Berliner Fernsehturm. Explore your artistic side on one of the many museums in the city. It also houses one of the best Natural History Museums in the world, packed with archeological findings of the natural world millions of years ago. Near-perfect skeletons of dinosaurs and glass jars of ancient reptiles. Radioactive spiders aren’t guaranteed.

Click here for Boutique Hotels to stay in Berlin


When you think of a Londoner superhero, you probably don’t think of Spiderman. Maybe Sherlock, Bond and the Queen. Regardless, our web-slinging teenage superhero is battling a supervillain on the famous Tower Bridge.

What is there to do in London? Big Ben, the famous London Eye, Tower of London where you’ll see the Crown Jewels (guarded of course, silly) and Soho to name a few. And of course, there's the Harry Potter studio and walking tours for the witch and wizard types. Hit the streets at the East End and you’ll get to visit some of the UK's best street art.

Bishop’s Stortford, Hertfordshire is the other filming location.

Click here for Hotels with Swimming Pool to stay in London


Sits on the province of Northern Holland. This is a small town packing a not-so-small 1 million inhabitants. It’s about 40km from Amsterdam. If you’re looking for a relaxing vacation, and get the authentic Dutch experience minus the tourists, Broek op Langedijk is a great place to start as you head north.

Click here for Hotels to stay near Broek op Langedijk


Of course, Spiderman’s birthplace. And of a few hundred more superheroes. What is there to say about this place? You’ve probably heard the usual, Wall Street, Empire State Building, Times Square, Central Park, Union Square, Opera House, Brooklyn Bridge, you get the idea.

Try out something different, during May 30th and July 13th, you can catch the Manhattanhenge 57th, 42nd, 34th or 23rd Street. During the summer solstice, the sunset aligns perfectly with the street bordered by skyscrapers on either side. And if you wanna feel like a superhero, try out Skydiving at Long Island or Yonkers.

There they are! Spiderman Far From Home Filming Locations! The movie took a new and interesting turn to the character. Plunging Peter Parker into new challenges in new environments. But that doesn’t mean he doesn’t get to have fun!

The film’s setpieces happened almost in most of the famous squares and landmarks of each of the cities above. It wouldn't be difficult to find the place where Peter stood exactly (unless it’s on the rooftops of course). We wish you a happy summer!